Redesigning An Icon: How UC Students Could Change Canberra's Cityscape
Canberra Centre has partnered with the University of Canberra to undertake the Ainslie Avenue Bus Shelter Competition.
Published 09 June

Canberra Centre has partnered with the University of Canberra to undertake the Ainslie Avenue Bus Shelter Competition. The competition was designed to engage with students by providing them the opportunity to develop a design inspiration for the Ainslie Avenue bus shelter.

The final 12 designs – from second year Bachelor of Architecture students – are on display for the next seven weeks, including the four winning designs. Executive Dean of the Faculty of Arts and Design Professor Jason Bainbridge said the competition is an example of the real-world experiences that University of Canberra students are exposed to throughout their degrees.

“This design competition has allowed our students to experience what it is like working in industry,” Professor Bainbridge said.

“The partnership with the Canberra Centre means that the students were able to design sustainable building solutions while working to a brief that actually changes the landscape around them.” “For the students, having their designs showcased in the Canberra Centre means that their family, friends, and the general public can see the terrific work they’re doing,” Professor Bainbridge said.

General Manager at Canberra Centre Gary Stewart said that the Centre is “very happy to have partnered with the University of Canberra on this project”.

“This exhibit will provide a public platform for the students’ designs to be displayed, allowing our entire community to see cutting-edge ideas from some of Canberra’s up-and-coming design talent,” Mr Stewart said.

The top three student groups each received a cash prize of $1500 as a result of winning the competition, and one group was awarded a $250 sustainability prize. 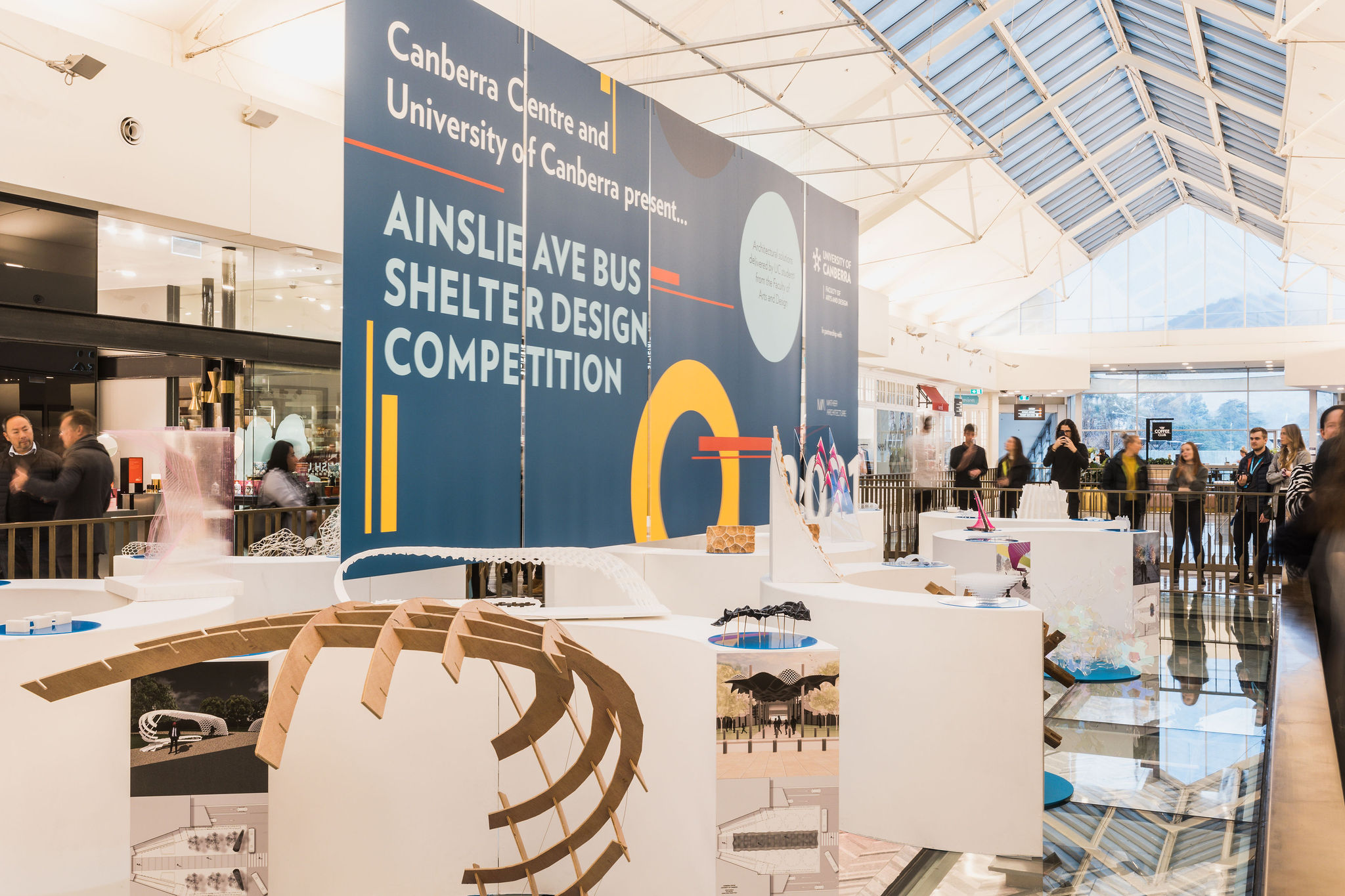 Bachelor of the Built Environment student Stephanie Williamson received one of the prizes for her design Swing Stop. “Canberra has very rigid geometry, so I was playing with a complete contrast to that, having a very swoopy and playful design – kind of like a ribbon floating through,” Ms Williamson said, “The current bus stop has a very prominent axis, so I wanted to flip that on its head.”

“It’s great to have opportunities like this, using a real site when designing, especially for our architecture students,” Ms Williamson said, “It’s so much more inspiring and you can come up with more creative ideas.”

Student designs are located on Level One, nearby Polo Ralph Lauren.